Using a picture of Archer Mayor as young boy dressed in a police uniform, the students were asked to write about the boy’s future in a writing contest. This contest was started in 2001 by Kurn Hattin Homes’ writing and processing coach, Ziggy Ostrowski and English teacher, Kristie Lisai. It was named in Ziggy’s memory after he passed away in 2005. The students at Kurn Hattin study in groups according to ability and the highest two groups in the 7th and 8th grades compete.

The 8th grade finalists were Dylan Conklin, Raven Stanhope and Jessica Cormia. The seventh grade finalists were Austin Ladd, Danielle Labrecque, Dylan Avery, and Zoey Anderson. The first place winner was Raven Stanhope, who wrote about a policeman who comes to a crime scene only to discover his loved ones are the victims. The second place winner was Danielle Labrecque, who wrote about a serial killer targeting teenage girls, and the policeman motivated to solve the crimes.

The two winners were awarded a cash gift of $25 and all of the contestants were recognized at the banquet with the author. In addition, The Paul Gordon Memorial Prize was awarded to Dylan Conklin. Paul, a cook at Kurn Hattin, had been a long-time judge and supporter of the contest. Paul passed away last year and the prize of a book, which the winner wants, is funded by Richard Johnson, Director of Food Services at the Homes. The prize is given to the student who shares the love that Paul had for reading and writing mysteries. Kurn Hattin Homes is a charitable, year-round home and school for in-need and at-risk children, ages 6-15, from throughout the Northeast. 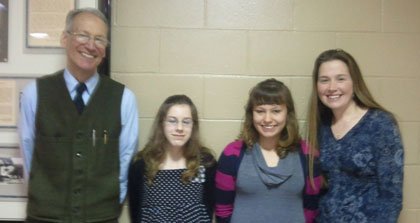