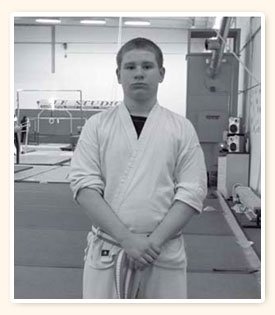 I watched as John Harris, a 7th grader at Kurn Hattin, practiced his Tae Kwon Do exercises at a nearby studio. He looked focused, relaxed and confident. A little later, he was presented with a new ribbon for his belt and was promoted to Novice Orange, First Degree. John is quick to admit that Tae Kwon Do changed his life. “I have a bad temper and Kurn Hattin and Tae Kwon Do give me the structure I need to get it under control,” John says with conviction. “I didn’t think I’d be given the opportunity to go to Tae Kwon Do classes. I don’t think anyone thought a martial art such as Tae Kwon Do would be my key to inner peace. But it truly is.” John’s Sensei (Tae Kwon Do Master), Huzon Alexander, claims “John is a great student. He’s always respectful and focuses on becoming his best. He seldom misses class. He listens and gains all the knowledge that he can. As a competitor, he had excelled in his divisions, winning his sparring division in every tournament that he entered last year. This year, he is traveling the state circuit with his goal of becoming State Champion.”

“My grades in school are better. I even want to go to college. My mother is so proud of me,” John smiles. “It’s tough being a kid. Feeling confident makes me want to do better in every part if my life. I’m learning to deal better with conflict and anger, and I have more friends. I really am a different person now,” he beams. Assistant Residential Director, Carol Bazin agrees. “Since September 2005, I’ve seen John grow and mature. To hear him talk about Kurn Hattin and how much he appreciates the help he has received over the years is touching. He is glad to have another year before he graduates. I am so pleased to be a part of his life here at the Homes.”

John is an astute learner. “From the first time I met John, he was at ease sharing his thoughts and asking thought-provoking questions,” reflects Sally Mundell, Kurn Hattin Librarian. “He has garnered a wealth of information and has developed reading skills well beyond those expected for his age. John’s knowledge and friendly demeanor have a way of opening more doors. He’s one of the most interested students I have worked with in the past 50 years.”

John’s definitely on a winning path and is grateful to everyone who has helped him along the way, including his fellow classmates. “It’s going to be hard to leave Kurn Hattin. I’ve grown really attached to this place,” he says solemnly. Without a doubt, we’ll all miss him, but we know he’s a champion and will always come out on top of whatever he chooses to do.