July 22, 2013 | Westminster, VT – Despite last week’s sizzling temperatures, golfers from all over New England came out to the Keene Country Club for the 22nd Annual Kurn Hattin Golf Classic to support children in need from around the Northeast. The event raises funds to help care for the children at Kurn Hattin Homes in Westminster,Vermont, a year-round home and school for boys and girls affected by tragedy, poverty, homelessness, abuse, or other family hardship. The work done at Kurn Hattin Homes is made possible solely by philanthropic donations and fundraisers like the Golf Classic. Monies raised cover tuition, healthcare costs, clothing and other basic needs for the children in Kurn Hattin’s care throughout the year. Golfer and Kurn Hattin Incorporator, Scott Bundy, said of the event, “Kurn Hattin is one of those places that gives kids a second chance. You’ve just got to support a cause like that.” 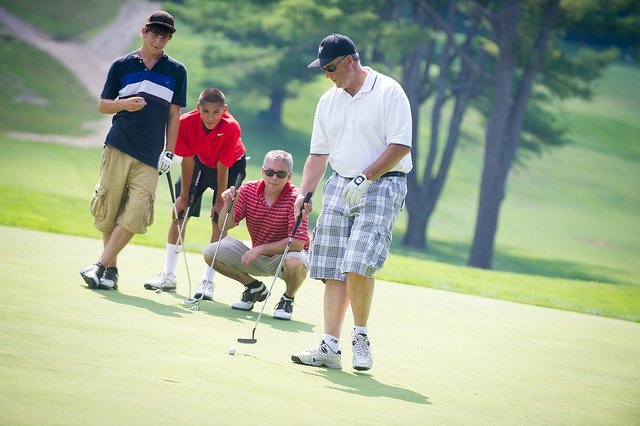 (Fred Bocko of Summit Distributing sizes up a putt, as his teammates look on.) Additional high-res photos of this event are available for download here.

A heartfelt thanks goes out to all the golfers, sponsors, raffle and auction donors, the Keene Country Club staff, Sheana Rodriquez, Catering Manager; Charlie Kamal, Golf Pro and the Pro Shop staff, and the Golf Committee and volunteers for making this event a great success.