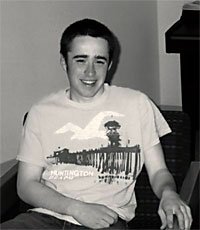 Josh Chaplin is 18 years old and he’s happy. He is an ambitious, energetic and determined young man. He’s so full of promise, and one can’t help but be affected by his ear-to-ear smile.

At ten years of age, Josh came to live at Kurn Hattin, where he stayed from third through eighth grade. He was very motivated and pursued both his studies and extra-curricular activities with great enthusiasm, taking part in all the sports and recreational activities available. Strongly attracted to music, he loved to sing and could be found stage front at many school performances. “Josh was an amazing musician,” remembers Music Director Lisa Bianconi. “He sang in all the choirs and performed several solos, played trumpet in the jazz band and was an important part of the marching band. Always smiling, he made friends whenever we performed. Josh has the spirit of Kurn Hattin,” she adds proudly, “and will always be fondly remembered and loved. I know he will succeed in life.”

Josh credits Kurn Hattin for giving him a home, and for teaching him the social and other skills that he needed to be successful in the years ahead. And he has done just that. Josh was accepted at the Milton Hershey School in Pennsylvania before graduating from Kurn Hattin in 2005. The school’s mission is similar to Kurn Hattin’s, and he adjusted quickly to his new life and location. In his senior year, Josh was among students given the opportunity to hone and practice life skills necessary for living on their own. He was given a monthly allowance and shared an apartment on campus, where residents had to make their own decisions regarding money and time management. Along with his apartment mates, he did daily chores, and planned, shopped for and cooked meals for the group. “If you spent all your money in the first few weeks, you’d be pretty hungry by the last week of the month,” he noted. Luckily, he usually had money in reserve, which earned him additional awards and prizes.

Jon Maki, Assistant Admissions Counselor at the Hershey School, has watched Josh grow and thrive. “I’ve known Josh since his days at Kurn Hattin, when I was the Family Outreach Coordinator (1999-2001). At Kurn Hattin, he always went through each day with a positive attitude and took full advantage of all the great things that Kurn Hattin offered. He has continued that healthy approach here. Involved in many activities, he is a valuable, contributing member of our campus community and loved by all. Coming to the Milton Hershey School can be a challenge for students, but Josh has seen this as an opportunity and has taken full advantage of it. Because of that, he is well on his way to having a wonderful life…and I don’t know anyone more deserving.”

What more can one say about Josh? A lot, actually. Dave Baldasaro, Assistant Principal at Kurn Hattin, recalls that Josh was neither the biggest nor the most talented athlete, but he always played and competed with a big heart. “What Josh may have lacked in ability, he made up for in determination. He overcame life’s adversities and excelled academically; he was an outstanding student in all areas. I’m so pleased to see how well he’s progressed in high school. I’m confident he will continue to be successful in college and life.” He’s certainly right on track. He was recognized by the Hershey School Alumni Association earlier this year with the Senior-Alumni Academic Achievement Award and received a $1000 savings bond and was runner-up for valedictorian at graduation. Josh also received a full scholarship to Syracuse University this fall.

Josh loves sports and music, and plans to make them his life’s work. “I want to be a sports journalist for ESPN.” Recently, he has been singing in a choir and taking piano lessons. He’s also been writing lyrics for songs—at least 15 so far. “I’ve worked very hard and didn’t leave any opportunity behind. To other kids, I tell them that they must be willing to realize the opportunity they’re being given. Don’t throw it away.”

In addition to his other ambitions, Josh is also planning on auditioning for American Idol. Be sure to keep an eye out for him when the new season begins. But whether he rises to the top of that particular competition or not, we know he’ll do his best. And all of us who count ourselves among his many fans know one thing for sure: he’s already a winner.