November, 11 2010 | Westminster, VT – The Kurn Hattin children coordinated by their social studies teacher, Richard Long, honored Veterans’ Day with a special program. Following the Presentation of Colors, A Call to Colors and a Moment of Silence, Taps was played by students, Sam Paulino and Scarlett Stanhope. Then the Kurn Hattin Cub Scouts Troop #401 led the audience in the Pledge of Allegiance and Father Richard O’Donnell, from St. Michaels Church in Brattleboro, gave the Invocation. The Lighting of Candles was a very special presentation remembering the fallen Vermont soldiers in Iraq and Afghanistan. Thirty-eight candles were lit by student, Dylan Conklin during the reading of each soldier’s name. Tom Fahner, Director of Educational and Residential Services welcomed the guests and Student Council President, Deionte Davis, read a proclamation from President Obama. The Beginning Choir sang, Americans All and two students reported on the Originals of Veterans’ Day.

Before the Veterans’ Day event, Brownie Troop #2483 went to the Westminster cemeteries and collected the old flags for retirement. They presented the flags to the Bellows Falls American Legion Post 37 Ladies Auxiliary. 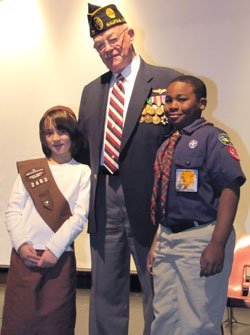 After this presentation, three students read their VFW Patriot’s Pen Essays about Patriotism and the Kurn Hattin Select Choir sang, Land That We Love. Following a special military tribute video, Father Richard O’Donnell gave the Benediction. The Retirement of the Colors concluded the program and the guests were treated to a turkey dinner with all the fixings in Watson Hall.

Photo caption:  Marine Veteran, Lt. Colonel, David J. Maysilles ’43 and President of the Kurn Hattin Board of Trustees with one of Kurn Hattin’s Brownies and Cub Scouts.