Kurn Hattin Has 18 More Reasons to be Proud

June 15, 2012 | Westminster – Saturday, June 9, 2012 was Graduation Day at Kurn Hattin Homes. It was a very important day and milestone for the 18 graduates. After all the students were in place on the stage, the Graduation proceedings began with Executive Director, Christopher Barry welcoming everyone and congratulating the students.

Reverend Father Lance W. Harlow, a long-time music program volunteer and friend gave the Invocation and the Benediction. Several students received one or more prizes from the nine categories of awards which included: Academic, Cottage, Sports, the Massachusetts Board of Directors, Alumni, Music, Scholarship, and awards for showing the greatest improvement, good citizenship and the greatest aptitude in the field of agriculture and the Executive Director’s Award, in Memory of John P. Barry, beloved Educator and Administrator were also given. Scarlett Stanhope, Valedictorian, bid a heartfelt and moving farewell before the presentation of diplomas by David J. Maysilles’43, President of the Board of Trustees, Executive Director, Christopher Barry and Deputy Director, Thomas Fahner.

After graduating, many of the students will stay on campus for the summer in the ninth grade transition program. Then they will rejoin their families and attend their local high schools in the fall. Others will go to the Milton Hershey School in Pennsylvania, and Rock Point School in Burlington, Vermont. Wherever they go, Kurn Hattin will always be their home. Kurn Hattin Homes is a charitable, year-round, residential home and school serving in-need and at-risk children, ages 6-15, from throughout the Northeast. Since 1894, thousands of children have called Kurn Hattin home. 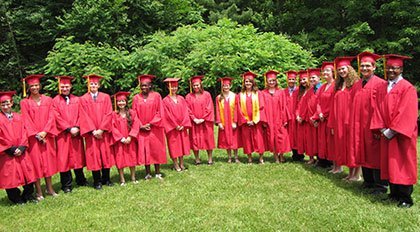