WESTMINSTER, VT—Lisa Bianconi, the Music Director at Kurn Hattin Homes for Children, has been chosen as one of 25 semifinalists from across the U.S. for the first-ever Music Educator   Award presented by the Grammy Foundation® and the Recording Academy®.  The 25 semifinalists, music teachers from 24 cities across 15 states were officially announced on September 11. In total, more than 30,000 initial nominations were submitted from all 50 states. 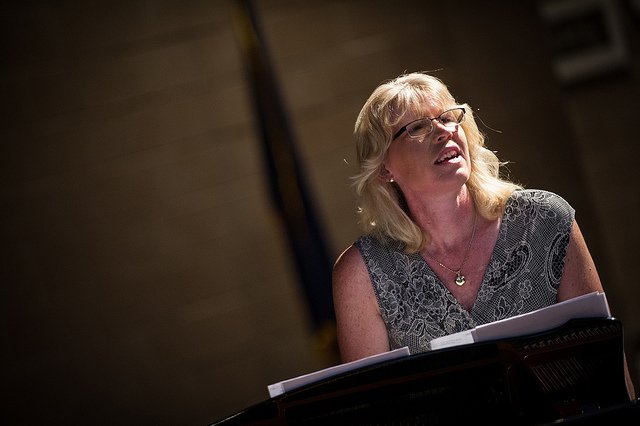 Kurn Hattin Homes for Children is a residential school serving children, ages 6-15, from disadvantaged backgrounds. The school’s one-person music department, Bianconi is the only nominee from all six New England states to move on to the semifinals.
The Grammy Music Educator Award was established to recognize current music educators from K-college, in both public and private schools, who have made a significant and lasting contribution to the field of music education and who demonstrate a commitment to maintaining music education in the schools. The award will have its inaugural presentation during Grammy Week in February, 2014.

In May, Bianconi learned that she was one of  217 music teachers in total, and one of three nominees from Vermont, who had been chosen as quarterfinalists. The 25 semifinalists were then chosen based on an essay submission, video footage of actual teaching sessions, and testimonials from students and colleagues. Ten finalists will be selected based on a school visit by Grammy representatives and additional face-to-face interviews.

After a several-month wait, on September 11, Lisa Bianconi received a phone call from Kellyn Robison of the Grammy Foundation letting her know the exciting news. “I am deeply honored to be recognized by this award,” Bianconi said “The support of Kurn Hattin’s staff and students over the past twenty-eight years has been amazing. They have allowed me to spread the joy of music, and I’m so thankful to teach here.”

Kurn Hattin Homes’ Co-Executive Director, Connie Sanderson, nominated Bianconi for the award. Sanderson said, “When you see Lisa’s passion for teaching children and using music as a tool to make a difference in their lives, it seems natural that she would be chosen as a semifinalist. She creates an educational environment that is infused with excitement and she brings out the best in every child.”