WESTMINSTER, VT.—For the second year in a row, the Kurn Hattin Select Choir has been chosen to perform on the televised singing competition, Together In Song, produced by Public Television member station WGBY Springfield. The children’s performance will be broadcast on WGBY this Saturday, March 22 at 8 PM. 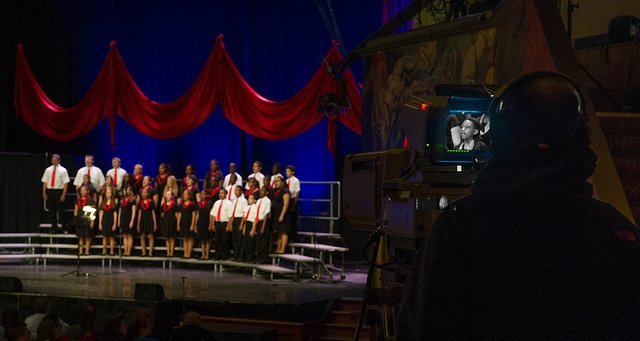 Located in Westminster, Vermont, Kurn Hattin Homes for Children is a charitable residential school serving children in need. The school’s Select Choir, 40 of Kurn Hattin’s best vocalists in grades 5-8, is the only Vermont ensemble chosen to compete on this season of Together In Song.

Pending a compilation of viewers’ text-in votes during Saturday night’s broadcast and judges’ scores, Kurn Hattin can advance to the final showcase, to air live April 27 on WGBY. Last year, the 2013 Kurn Hattin Select Choir took the prize for “Top Performer”  in the children’s gospel category.

“The kids have been working incredibly hard, and we’re hoping everyone will tune in and vote,” said Kurn Hattin’s Grammy-nominated Music Director, Lisa Bianconi. Bianconi said the students traveled to WGBY’s studios to tape their segment in early February and received word last week that their entry was among those selected to appear on the show.  “This is a huge opportunity for these children to shine, and that sense of accomplishment goes a long way for them.”

Now in its fourth season, Together in Song is hosted by Springfield Symphony Orchestra Maestro, Kevin Rhodes and features a selection of the best non-professional children’s and adults’ choruses from the Western New England region. The groups compete in ten categories according to age and musical genre.