WESTMINSTER, VT—Kurn Hattin Homes for Children hosted a weekend of special events August 1-3 to celebrate the 120th year of the school’s founding and the centennial anniversary of its Alumni Association. Kurn Hattin, located in Westminster, Vermont, is a year-round home and school serving boys and girls in grades K-8 who are from disadvantaged backgrounds. Graduates from as far back as the early 1940s returned to the Westminster campus to reunite and reminisce with classmates, friends, and staff. 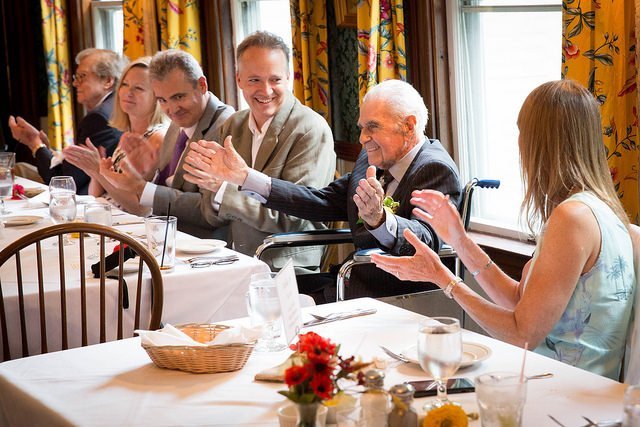 Among the alums in attendance was Kurn Hattin graduate and renowned jazz trombonist, Dick Nash (Class of 1942), along with his two sons—Grammy-nominated saxophonist, Ted Nash, and founder of Nash Guitars, Bill Nash—and several members of the extended family. Dick Nash grew up in Boston and came to Kurn Hattin Homes for Children at the age of 11 after losing both parents to illness. He picked up his first trombone in the Kurn Hattin band and upon graduating, returned to Boston to study under the legendary John Coffey of the Boston Symphony Orchestra and finish his degree at Berklee School of Music. He eventually went on to become one of the most recorded trombonists in history. His unmistakable, smooth trombone sound is featured on all of Henry Mancini’s albums, as well as thousands of motion picture and television soundtracks, including Breakfast at Tiffany’s and the John Wayne filmHatari. His son, Ted Nash, is a New York-based jazz saxophonist whose 2010 albumPortrait in Seven Shades garnered two Grammy nominations.

The 86-year-old Nash made the trip to Vermont from his home in Los Angeles to accept Kurn Hattin’s Alumni Lifetime Achievement Award at a special ceremony Saturday evening at the Saxton’s River Inn. The award honors a Kurn Hattin graduate who has gone on to make significant, lasting positive contributions to his or her community and to the world. The school’s Development Director, Kim Fine, presented the award, saying “Dick Nash is a wonderful personification of the values and principles that are the cornerstones of our mission at Kurn Hattin—resilience, hard work, dedication, self-reliance, humility, and generosity, to name a few.”

Nash’s son Ted, who took time out from his busy tour schedule with the Jazz at Lincoln Center Orchestra to attend the ceremony, presented the elder Nash with a bound book of letters written in the 1930s between Kurn Hattin’s then director, W.I. Mayo and Dick Nash’s guardians, as well as original letters written by Nash as a young man. The letters, which had been preserved in Kurn Hattin’s archives, thanked Kurn Hattin for having given Nash his start in music.

Upon accepting the Kurn Hattin Lifetime Achievement award, Nash said, “This award means more than all the others because this is where it all began.”

FOR MORE INFORMATION ABOUT