My life before I began school in Vermont was like a one way ticket to nowhere. I was the ultimate manipulator and deceiver. I knew how to use other people’s weaknesses to my advantage. Authority meant nothing to me, except when it came to my parents. I always found a way to put the blame on others. I looked for trouble where I could find it. It is safe to say that I had a serious behavioral problem. That all changed when I went to Kurn Hattin.

New York City may be a wonderful place to live, with great opportunities; however it can also swallow a young person whole if they are not strong and experienced. At the time, I was neither strong nor experienced.

My first five years of grammar school were traumatic. The influences I was receiving were awful. It was survival of the fittest. In order for me to survive my surroundings, I was conforming. My classrooms were overcrowded and teachers were overwhelmed. I was not getting the attention I needed or deserved as a student. My grades were terrible. Since I wasn’t given any attention with school work, I was going to receive it in another way. On occasion, I might even throw some chairs around the room or jump on some tables. You could count on seeing Gizelle Sanchez in the principal’s office. My mom watched in fear as I withered away; my thoughts, experiences and learning abilities vanishing right before her eyes.

My local junior high school had 3,000 students who had to pass through metal detectors. No child should have to go to school in survival mode. However, the true catalyst to sending me to boarding school came when a bullet came through my bedroom window. In just a few weeks, I found myself on a greyhound bus to Vermont.

I hated it at Kurn Hattin. My life was being controlled by people who were not my parents. One step out of line and into the “IHS” room I’d go. I spent most of my first year in that room, the small white room, writing essays and getting my food brought to me like I was some kind of a criminal. It didn’t take me long to realize if I wanted to get through that school, I had better smarten up and that’s exactly what I did. 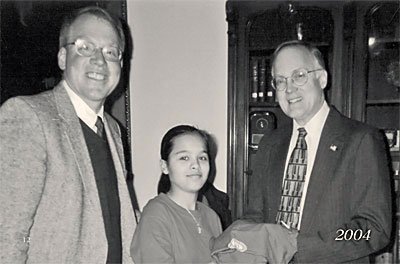 Once I let myself conform to the standards of a Kurn Hattin student, I realized what Kurn Hattin was all about. Kurn Hattin provided an environment that was caring, safe and positive. They taught me to value tradition, such as respect for others, integrity and responsibility. They taught me how to appreciate and love to learn.

Leaving home and attending Kurn Hattin was the best thing that could have ever happened to me. I was happy and became proud of being part of something special, being educated. I have been taught to work hard on who I am, so that when I go out to the world, I will not compromise who I am and what I believe in. With each passing day, I want to be a better person, so that I can make the world a better place to live. Being educated helps me to understand the unknown, so that I will not be afraid of a challenge or others who may be different.

While at Kurn Hattin, I had become part of the student council, in the capacity of vice president and then president. I became a member of the Rotary Club and participated in community services. I represented my class when we went to meet the Governor of Vermont, Jim Douglas.

In the end, all I wanted was to make my parents proud of me and Kurn Hattin showed me how to do that. I wanted to be challenged mentally as well as physically. They helped me with the problem that everyone thought was going to be my greatest downfall. Kurn Hattin is the reason why I’m writing this essay right now. Without their help I wouldn’t have accomplished all that I have in these past years.

Editor’s Note: Gizelle is a freshman at John Jay College of Criminal Justice in Manhattan.