May 7, 2012 |  Westminster, Vermont – Christopher Barry, Executive Director of Kurn Hattin Homes honored the hard-working and dedicated staff at Kurn Hattin Homes with Years of Service Awards during the May 2nd, All Staff Meeting.

All the honored staff received a framed certificate of appreciation and an extra paid day off. The twenty-year honoree also received a Kurn Hattin rocking chair. Chris Barry ended the award ceremony with his praises to all the staff for their dedication to children and the mission of Kurn Hattin Homes. 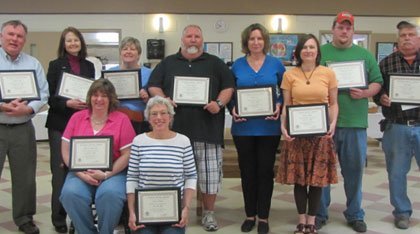