WESTMINSTER, VT – Kurn Hattin Homes for Children held its 22nd Annual Conference on Friday October 25th. Each year the organization has held an educational conference to offer new opportunities for training and skills development to staff, educators, human service organizations, and community partners from all over the eastern region. This year’s topic was Treating Trauma and Attachment Issues in Children and Families. The featured speakers were Terry Levy, Ph.D., B.C.F.E. and Michael Orleans, M.A., D.A.P.A., co-founders of the Evergreen Psychotherapy Center and the Attachment Treatment and Training Institute in Evergreen, Colorado.

Orlans and Levy describe attachment is the “deep and enduring connection established between a child and caregiver in the first several years of life. It profoundly influences every component of the human condition – mind, body, emotions, relationships and values. Attachment is not something that parents do to their children; rather, it is something that children and parents create together in an ongoing reciprocal relationship.” Although attachment theory has been around for several decades, it is only recently that it has began to receive the recognition it deserves as an effective and practical tool for healing struggling children and their families. Treatment has been found to be very effective with children faced with the impact of abuse, trauma, and/or abandonment who may not respond to typical play and talk therapies.

The doctors explained that treatment always begins with the parents addressing their own attachment histories and styles, and how those early life scripts present themselves in their current relationship dynamics as both spouse and parent. Then they are able to work with the child, and ultimately the family as a whole, establishing that important connection of love and trust with the parents. Conference attendee, Deb Witkus of Greater Falls Connections was invigorated, “I have never walked away from a conference feeling so hopeful and inspired about treating children without medicating them.” Another, the director of a local childcare center with three adopted children of her own, described it as the best conference she had ever attended. 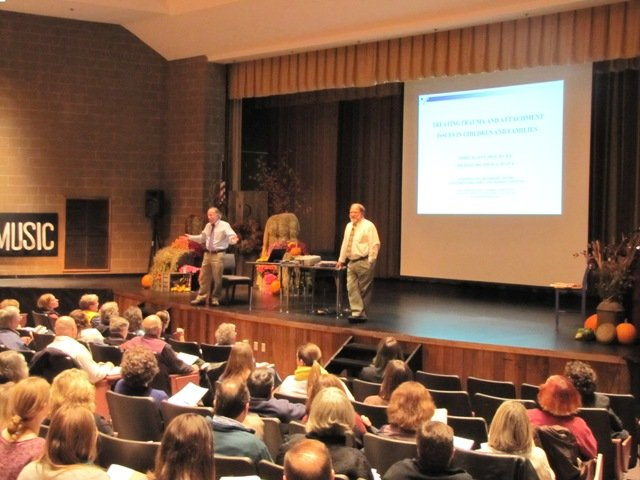